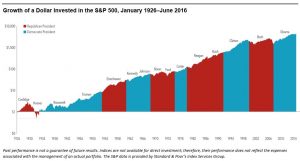 Undoubtedly most of America was surprised by the outcome of Tuesday’s presidential election. For some “surprised” is an understatement of course. Their feelings are probably better described with words like shocked, stunned, or outraged.

For others, the surprise was welcomed. Given the polling leading up to election night, millions likely cast their vote fully expecting their candidate to lose only to wake up to a stunning victory.

Regardless of your political views, the sun did rise on Wednesday morning. Incredibly, it also followed suit by rising on Thursday and on Friday as well.

However, it’s undoubtedly true that the election of a political unknown results in a lot of uncertainty. At the same time, many others would argue that putting a career politician in the White House wouldn’t be good either.

Ultimately, most Americans agree that the government status quo hasn’t worked and many were desperate for a new direction. For some that meant Bernie Sanders. For others, the choice was Donald Trump.

The purpose of my discussion here is not to offer thoughts on the direction of the country or my views about the election itself.

In fact, I regularly remind my clients that I do not allow my politics to drive my investment decisions or my recommendations. As we’ll discuss in a moment, doing so is dangerous to our wealth.

Likewise, I encourage my clients to do their best to keep their emotions about any news subject, political or otherwise, in check. Instead we should place as much of our focus as possible on what we can actually control.

When it comes to this election (or any other), it’s perfectly acceptable to have strong positive or negative feelings. However, making drastic decisions about our investments based on those feelings is a slippery slope. Evidence demonstrates that such actions can be far more dangerous to our portfolio than whoever takes control of the Oval Office.

With that in mind, let’s get to the purpose of this post, which is to put this election in perspective by reviewing history.

While Government Policy Can Impact Returns, We Shouldn’t Give the White House too Much Credit (or Blame)

As the chart at the top clearly illustrates, markets have rewarded investors across many political administrations, both Republican and Democrat.

There is no clear pattern that suggests that stocks do better under one party versus the other. Nor do we see any reliable opportunity to time the market based on who is in the White House.

Instead, the takeaway from the chart above is actually quite simple: Over the long-term, investors have greatly benefited from stock market returns regardless of the ebbs and flows of political control.

For those that have embraced this perspective, the rewards have been substantial: The S&P 500 Index has increased by approximately 10.0% per year from 1926 through 2016.

Conversely, we know from extensive research that those who believe they are smarter than the market (on the one hand) or who fear it (on the other), rarely succeed when they take action based on emotion.

Instead, they add risk, increase expenses, raise their tax bill, and typically underperform the very investments they buy and sell.

While it’s tempting to allow our often strong political feelings to influence our investment decisions, it’s better to remain politically agnostic as it relates to our portfolio. Instead, we should focus on designing the right portfolio for our specific needs and remember that returns are not dependent on any particular party or candidate.

Whether you’re feeling victorious or defeated this week just know that this country is resilient and so is the stock market. Inevitably, both will likely surprise us again in the not too distant future.

Wondering why your advisor recommended a certain investment?Confused about how much you’re really paying? Click Here

© 2013-2020 Wealth Engineers, LLC. All rights reserved.
Wealth Engineers is a fee-only Registered Investment Advisor (RIA) regulated by the Colorado Division of Securities and the California Department of Business Oversight.
Important Disclosures & Terms of Use | Privacy Policy
Back to Top

To access your Wealth Engineers Planning Portal to view a comprehensive picture of your finances, click the link below and login with your username and password:

To access your Wealth Engineers Investment Portal to view portfolio asset allocation and performance reports click the link below and login with your username and password: